Last night my friend Andrea and I went to see 45 YEARS (Andrew Haigh, 2015) at the accursed Kendall, where the ticket girl was a peach, but the movie was out of focus. I was surprised to see in the end credits that this movie was shot on film, only presented digitally.  In the theatre we saw it it looked bad – very video, very flat – no doubt due to a shoddy digital projector. Some people seem to think digital projection means that movies are always sharp and in focus now, and while the focus, if not the image, tends to be better than it was in the film days (in multiplexes, anyway), it is often not, which makes me crazy. Plus, while the film doesn’t get scratched, it’s true, the screens are often in disrepair so they may as well be reflecting a scratched film. This screen had a discolored seam that left a brown line throughout the entire film. Star Warz the other night was projected onto a screen with a big gash at the top (how do these things even happen?). Glad we paid extra for that shitty theatre. 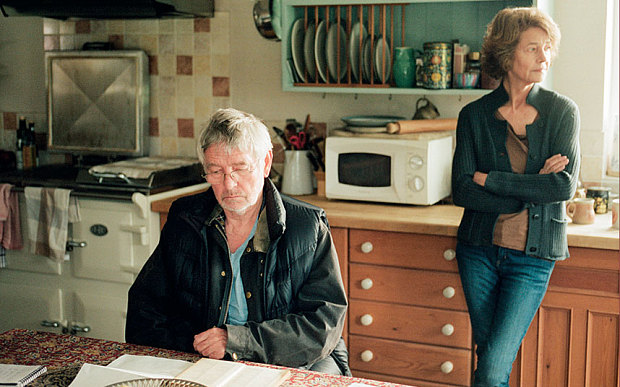 Tom Courtenay (b. 1937), star of THE LONELINESS OF THE LONG DISTANCE RUNNER (1962), and Charlotte Rampling (b. 1946), co-star of ZARDOZ (1974) play a married couple about to celebrate their 45th wedding anniversary when Courtenay receives unsettling news that dredges up a story from before their marriage. He requires a dictionary to understand the news, which has arrived via post, in German.

Days march by, as they do, and the days follow a settled routine. Rampling walks the dog through grey English scenery, Courtenay listens to songs from their youth that they might play at the anniversary party.  The clock ticks, Rampling drinks half a glass of water. They visit friends, Courtenay tries to fix the loo. Evenings, they have uncomfortable conversations about the woman before Rampling. He spends some time thinking and talking about the past, fixated; Rampling spends time thinking and becoming jealous of the past. What might have been.  Their shared history is overshadowed by a past that was and wasn’t.

Why do we find it so difficult to let things go? This marriage, hearty or at least functional for 45 years, founders because of imagined injustices, nostalgia for youth. The actual drama is long over; only self-inflicted mental drama remains, and yet it is so powerful. Also, why do we find it so hard to give up physical things? Helping this tale of emotional torment along are boxes and boxes of mementos, filling the garage and the attic. Why do we hold onto these diaries, photographs, recordings of our lives? They note a moment never to be repeated, for better or worse. We can’t go back.

Rampling’s face is a permanent unhappiness.  Severe and beautiful, she looks like she will never be satisfied. As Andrea remarked, her expression is so often icy, any ounce of real emotion is a revelation. Courtenay wears a scruff of whiskers, making him look older than he might, and more at sea. Their talk is stilted, a bit stagey. When he recounts tales of his old flame, it’s like he’s reading a novel aloud. The landscape of Norfolk around them should be beautiful, but it is flat and uninviting. The film retains an even keel. The anniversary party happens, then what?

45 YEARS was good enough. Not as suspenseful as I’d expected, but perhaps as Andrea said, “quietly devastating.” This story was inspired by real life, and I wouldn’t mind seeing another film based more on the news item.