What a movie! I came for Randolph Scott, but I stayed for the animals. Spoilers follow.

There are so many good animal scenes in this movie! Irene Dunne sings to the most attractive ever farm animals, including adorable pigs and cows, as she feeds them. Elephants help save the day, and there is a great cat sequence. A horse masquerades as a beautiful woman and nuzzles a man’s neck.

Irene Dunne plays a vivacious singer who comes to town in her father’s traveling medicine show & charms Randolph Scott (I mean, he’s not made of stone). Dunne is passionate, and in love with Scott, but Scott also has another obsession – oil, and he kind of takes her for granted once they’re married. Eventually, she stops putting up with it. She loves things that are alive; he is obsessed with a substance made of ancient dead things. This is Hollywood, though, so we expect certain things to happen. The plot isn’t predictable, but some outcomes are. 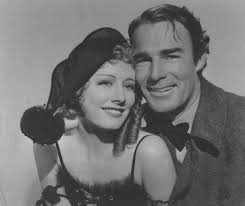 Oil, of course, plays a role here, but so do animals and the natural world, love, commerce, and entertainment. It’s a complex film, beautiful to look at, with its creative yet subtle cinematography, especially in the luminous, soft grain, 35mm print I was lucky to see. Honestly, probably you shouldn’t bother with a digital version – you’ll miss half the film.

Scott’s oil derrick produces soon after they’ve made their vows, a black, disgusting ejaculation. There is much rejoicing from the villagers, and they rush to be covered in the black rain. Scott’s grandmother and wife are not so sure – they see immediately the destruction of the world – why would anyone celebrate black, oily rain? Scott, thrilled by the realization of his dreams thoughtlessly, oil-ey, embraces Dunne, who remarks that his carelessness has destroyed a family heirloom, the beautiful wedding gown worn by her and his grandmother and her mother. It’s a telling minor tragedy to those who are paying attention. He brushes it off.

Once the romance is out of the way, it is a depression-era, Capra-ish plot concerning the small-time oil farmers vs. the black hat railroad syndicate. This side of things has taken on a new dimension eighty years on in an era of global warming. Scott, spokesman for the farmers, says he wants cheap oil for the poor; Alan Hale Sr. leader of the black hats, says oil should be controlled by a few heartless capitalists. Scott’s victory, if he has one, will ring hollow for modern audiences.

Oil, whilst the populist goal of these passionate characters, will in reality be the undoing of our world. The film takes place in a purgatory betwixt the industrial revolution and the mid-century full-on exploitation of fossil fuels. There are no cars in the film, only steam trains and horses. Once oil has been found, there is a montage of the destruction of the land – ancient trees are felled and the landscape is replaced with a charcoal forest of oil derricks. Is this a good thing? Hello industrial horror, goodbye natural world. The film is ambivalent in its treatment of this progress.

Like the women characters, I don’t like this plot point, the discovery and exploitation of “the blood of the earth”. Looking back, is it as inevitable as it seems? We may have a needlessly fatalist viewpoint of fossil fuels.

The oil rush leads to the town inviting more people to move there. To move to a new place to exploit its natural resources is to destroy it. This happens today as it did a hundred years ago. You may wish to promote people to move to your town: more citizens = an easier lifestyle for all until the population reaches the breaking point. But where is this elusive breaking point, and how not to reach it? The country these days has certainly surpassed it several times over.

The landscape in the film is rent by a pipeline – we can only wince, imagining all the places where it could leak, polluting the land and streams of pre-post-industrial America. We recall the opening scene, in which the medicine show, hawking this “rock oil,” uses a white man in Indian garb to promote its use. Today the real Indians, our Native Americans, protest pipelines in North Dakota and face the awfully ironic charges of trespassing.

They say change is inevitable, and you shouldn’t stand in its way, but why does it seem like change always has to be for the worse?

Women sing songs and care for one another while men destroy the world.