I don’t recall the particulars of my first exposure to Tom of Finland, but I came across these fetishistic, homoerotic illustrations as a virgin teen many times, and was rather scandalized by the cartoonish drawings of men with big chests and huge cocks bulging menacingly beneath their clothes. They had a kind of 1950s Charles Atlas beefcake style, and the men often wore leather. The images must have shown up in ‘zines and on punk show fliers, and we probably also found them leafing through books at the underground bookstore or at the punk sex shop Hubba Hubba in Cambridge. In any case they are instantly recognizable to me and seem like they have always been.

I didn’t expect to be so moved by TOM OF FINLAND (Dome Karukoski, 2017), but why not – it is a film about a person, after all. I guess I expected it to be more about sex and less about love – why should those two thing seem so different? I showed it last week to a school auditorium full of gay men at the 2017 Provincetown International Film Festival.

First of all, this is a beautiful, high budget film, made in Finland about one of its most famous sons, Touko Valio Laaksonen, AKA Tom of Finland. This year (2017), Finland celebrates 100 years as an independent country, and the film is part of the Finns’ year–long cultural celebration! There was a stage musical based on his life playing this year, also part of Finland at 100, which must have been something. Can you imagine a film about Robert Mapplethorpe or Irving Klaw being celebrated as part of the American bicentennial, even if it were to happen in 2017? Tom of Finland was not merely an erotic artist, he was one who celebrated a sometimes dark (? maybe this is virgin teen me talking), fetishistic side of gay male sexuality. Motorcycle cops and other authority types in leather figure prominently. His work was also probably the most influential gay imagery of the 20th century, achieving worldwide (well, Western world wide, anyway) recognition and distribution. I mean, I was familiar with it in the late 80s as teenage suburban punk. I saw his work before I saw Mapplethorpe, before I saw any of Warhol’s films, before I knew who Joe Dallesandro was. I never expected to see a film about his life.

The film is beautiful to watch. The men are handsome and the scenery is lovely. There are a lot of scenes outdoors with birds chirping and bugs flying about in the golden hour sunlight. A man is killed in the most beautiful field you’ve ever seen on screen, and one can almost smell the summer air and feel the long grasses. The post-war architecture is warm wood and white plaster. A few soft rabbits appear and they are not harmed.

The story begins in WWII with our hero, a young man in the Army, exploring his culturally dangerous sexuality. He never feels any shame about his love of men, although he certainly does not have an easy time of it in the repressive 1940s and 50s, and his closest family do not approve. 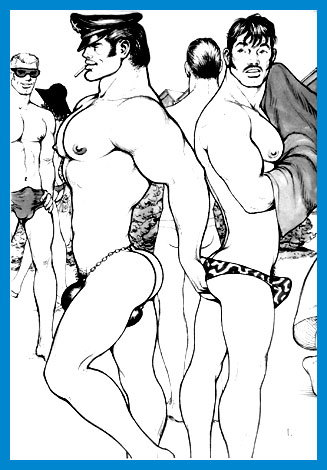 The film makes a bit of a cowardly move by not showing the art onscreen for too long. We see enough to get an idea of what it is all about, but not so much that the straight set might squirm. This is my only complaint about the film, which at 2 hours running time would normally be too long for me. I wasn’t looking at my watch – it felt like the perfect length for what it had to say.

So why did I cry during the movie? This film is really about freedom and fuck those oppressors! There is no sense of shame about gay love or sexuality, but the difficulty of pursuing it in oppressive times is not glossed over. There is an aura of nostalgia about the lost excitement of this secret society; the password at the door, the stolen look, the dark parks, the surprising accomplices, the raids. No bachelorette party invades the gay bar, and nothing seems watered down.

Neither is the movie didactic – I never felt like this was an object lesson, just a story of a man with a lot of heart and a loaded pencil. I cried for secret art, for forbidden passion, for freak survival. I cried for Finland’s eventual acceptance and celebration of this weirdo artist. I cried for everyone who grows up in a small scene, unsure of themselves, who find kindred spirits and a large community when they leave home. Also for the necessary but sometimes impossible compromises families must make to stay together, be those families logical or blood. And of course for the difficulty of marriage, legally binding or not.

Forbidden love is a literary trope that has been around for a long time. I am unbelievably happy that the world is changing for the better in the Western World, and that LGBTQ love is becoming less of an issue as we are becoming more accepting as a society. But along with this forward trajectory, we are losing something culturally. This is always true as societies modernize, and I hope we can both be happy that life is getting better for a lot of people and also recognize the lost, interesting world that has disappeared as part of this victory, perhaps mourn it a bit without stepping back into it. The gay scene, for better or worse, will never be the same. The closet door is open.

I saw 16 movies at the festival this year, and TOF was definitely my fave. The credits acknowledge this is perhaps not exactly as it really happened. But probably it is close enough.