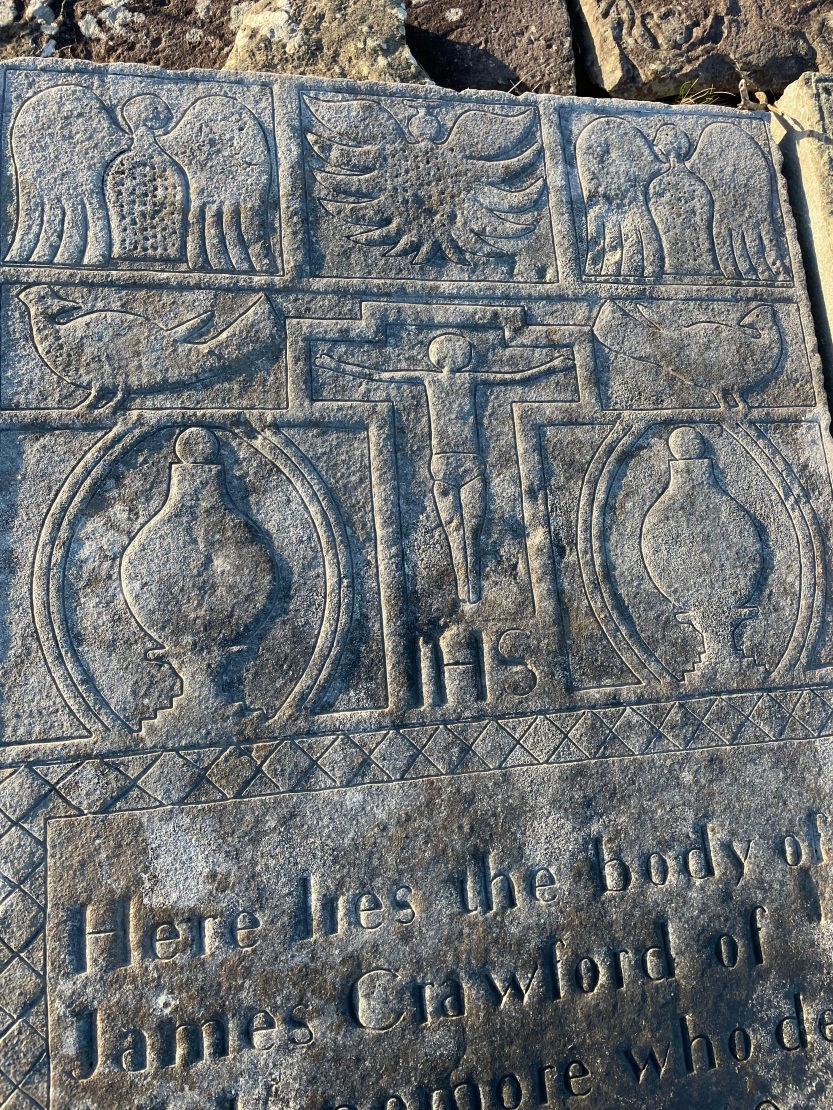 As many of you know, I am a graveyard enthusiast. I grew up across the street from a cemetery, and I loved the different designs of the stones. I have always loved graveyards and visit them when I travel. (Vienna, by the by, has one of the greatest cemeteries in the world. If you find yourself in Austria, do not miss it.)

I’ve been visiting Irish cemeteries since first coming here with my family in the 80s. From stone age burial grounds to modern churchyards, there are a lot of dead to pay one’s respect to here. Now that I live here, one of my new hobbies is taking pictures of gravestones for people on Find A Grave. This site helps you locate and see the graves of ancestors and celebrities! Here is an example from Vienna, which I visited in person.

There are a number of burial grounds around here. They go by different names – cemetery, graveyard, burial ground, church yard, cillin. I’m not sure what the difference between graveyard, burial ground, and cemetery is, but I prefer the term graveyard myself. The cilliní are certainly the saddest sites. They are for unbaptized children and strangers (whose baptism status was unknown) and for those not allowed to be buried in consecrated ground. Often the stones are just markers with no names or dates. In related news, our neighbor was by for tea yesterday and told us he believes an infant was buried in the field next to ours decades ago, along a wall, as stillborn and infant deaths were traditionally buried if not in a cillin, and he will have a priest come to bless the area. He believes the spot was marked with a Whitethorn.

Today I revisited a graveyard I went to last month, Killernan. The first time I got there late in the day and didn’t have time to fully explore it, but I knew I wanted to go back because it may be the prettiest graveyard in Ireland. It is sited on a hill, and the graves are terraced. The enclosure is coffin-shaped! I stole this image from here.

I parked at the end of the lane and walked up, stopping to give the pony an apple. I was heartened to see it had more food than the last time we met.

There is a gate and a nice stone stile, covered in ivy. The pony has apparently been in the field, but not for a while. According to local history, there was once a monastery, or at least a church here. Its stones were eventually re-purposed by a local farmer, and now there is just some earthwork to be seen. It’s easier to make it out from the road below.

There are two holy wells here. The one you can see from the road is dedicated to the Virgin Mary, and is well kept up. The second is attributed to the founder of the monestary, Saint Earnan, after whom the townland and graveyard are named, and friend of my almost namesake, Saint Columbkill. I have a new-found affection for Irish holy wells. These two are excellent examples. The Virgin Mary‘s wellwater is a brackish green, but has clearly been cared for lately, with fresh flowers and paint. As is my wont, I dipped my hand in the water and rubbed it on my face and hands for luck.

I prefer the corbelled-roof, primitive style of Saint Earnan’s well. It is spooky! I didn’t get inside to take some water, although there was a glass jar left there for the purpose, just because I was alone and fearful of falling in!

Now that I have told you everything about the graveyard’s surroundings, let’s have a look at the place itself.

The graveyard is built into a fairly steep hill, and you can’t get around it without stepping on graves. Most are flat slabs, approximately 5ft x 3ft and 6 inches thick. There are some vaults and a few modern stones. The majority are flat, 19th century slabs of the local fossilized Liscannor flagstone, which is very beautiful. Some slabs are unmarked. I don’t know who the stone cutters were in the 19th century, but they did a great job. The iconography looks much older than the refined Victorian designs I’m used to. These look quite primitive, like something medieval, or at least 17th century. Here are a selection of my favorites from today’s walk. Click on the image for a closer look.

I love these simple, cartoon images on James Crawford’s grave slab. I also like this font. This is the only grave by this stone cutter, as far as I could tell. Fantastic work.

Honoria Clearly erected a beautiful grave slab in honor of her beloved husband Thomas in 1871.

Jesus is so happy to have died for your sins! And look at this happy angel! And keys and whatnot! Margaret Tubridy must have been quite a woman.

This graveyard has something I’d never heard of before, a coffin resting stone! This is a spot on the wall by the well where a coffin could be moved from the hearse to the wall and then carried in to the grave. It makes sense for this steep graveyard.

Join 51 other subscribers
Follow Here comes the Judge. on WordPress.com